From the moment you wake up you can start using buenos días (assuming you are not getting out of bed in the afternoon as some people do).

After sunset you would say buenas noches which is similar to our good evening though literally translates as good night. However, unlike in English where good night is used to say goodbye or when you are going to bed, in Spanish buenas noches can be used as a greeting.

The tricky part is during the early morning hours from midnight (la medianoche) until around 4 in the morning (called la madrugada in Spanish). At this time you could use either buenos días or buenas noches.

If you are getting up VERY early (you might be a baker or in some other profession that has to get up much earlier than everyone else) then you would use the greeting buenos días.

If you are still awake at that time and you haven’t gone to bed yet, you would use buenas noches as a greeting.

Why do you use buenos with días and buenas with tardes and noches?

(Don’t worry, we will see more about masculine and feminine words later)

Other ways of greeting in Spanish

Some people may use a shortened form of the typical greetings and just say Buenas. This is informal.

You may also hear Buen día.

The most common greeting at any hour of the day is hola (=hi). This is of course informal.

How do you say good morning in Spanish? Buenos días

How do you say good afternoon in Spanish? Buenas tardes

How do you say good evening in Spanish? Buenas noches 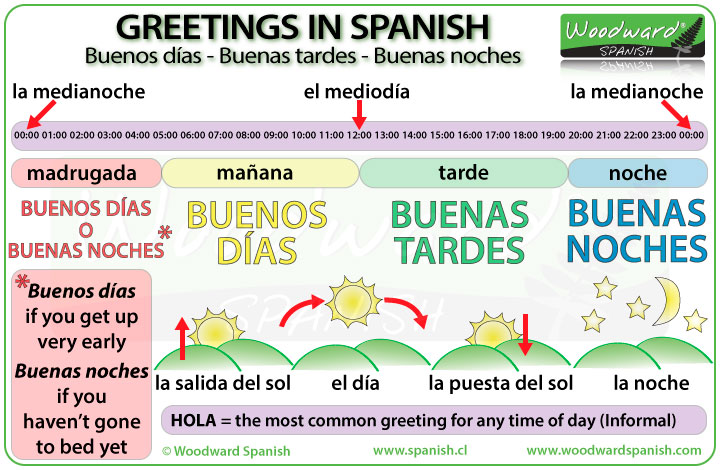