Spanish Nouns ending in O and A – Singular or Plural

As we have already seen, many Spanish nouns end in O or A.

How can we make a plural noun in Spanish?

When a Spanish noun ends in O or A, it is very easy to make that word plural. We just add the letter S to the end, just like in English.
So the noun gato (singular noun) becomes gatos (plural noun). Look at all of these nouns in singular form and plural form:

Of course, there are other types of nouns in Spanish that don’t end in O or A, though we will see how to make those nouns plural in another lesson. (Don’t worry: They still end in an S.) 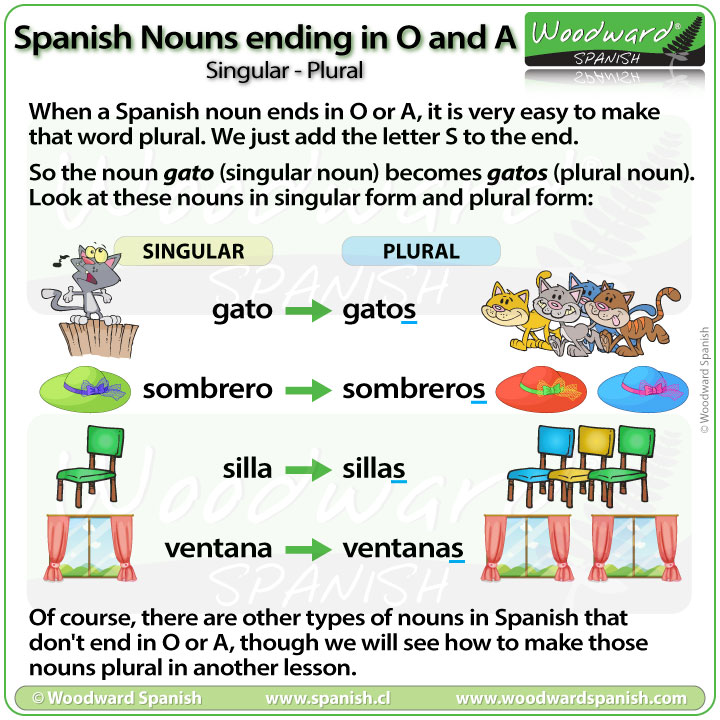 FIRST TIME
The first time you watch the video, do it as you normally would. Say whether the word that appears is singular or plural. Try and remember the names of each thing that appears on screen.

SECOND TIME
The second time you watch the video, cover the section of the screen where the name of the word appears in Spanish (to the left of the picture). When a new picture appears, click pause and see if you can remember its name. Don’t worry if you can’t for now, there are a lot of words to remember. When you think you know it (or even if you don’t), uncover the word to confirm your answer. Another option is to wait for the name to be said and imagine how it is written. Again, uncover the word to check your response.

THIRD TIME
This time DON’T look at the screen, just listen to it.
When you hear the name of the word, click pause. Think about what it means and if it is singular or plural. When you think you know the meaning of the word, open your eyes to confirm whether you were correct or not. Did you also hear whether the word was singular or plural? If you did, bonus points!!!